On Saturday, 18th September one of Llandudno Rotary’s longstanding Members, Dr. Ashok Harshey, completed a gruelling 22 mile walk from Bangor Pier to Llandudno Pier. The walk was in aid of two charities close to Ashok’s heart. 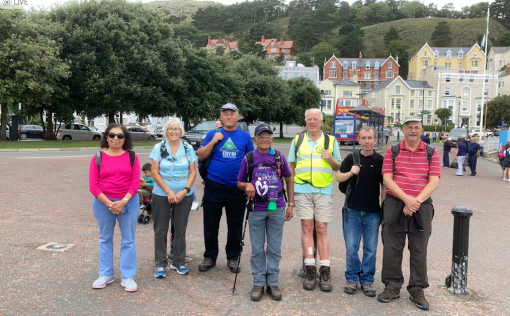 (Ashok and his supporters on Llandudno prom)

Ashok shared details of his route and team members who joined him throughout the journey:

‘’ I left home at 7am to go to Bangor Pier, on my way I picked up a couple of friends from our walking group.  We commenced our walk just after 8am from Bangor Pier. We followed the Wales Coastal Path out of Bangor and reached the coast at Glan y Mor. At Llanfairfechan beach we were joined by Rotarian Steve and guest and later at Penmaemawr joined by Rotarian Ian. We continued our walk along the coastal path to Penmaemawr, Conwy Morfa, Conwy Castle, Deganwy and West Shore and arrived at Llandudno Pier at 16.45pm. We were welcomed by my family members, friends, and Rotarians at Llandudno Pier.’’

Ashok explained what he enjoyed most about the challenge:

“I enjoyed having company throughout the walk. Six of my friends joined me along the way, some from Llanfairfechan and one along the whole route from Bangor.’’

Ashok mentioned that the surface from Penmaenmawr onwards was harder than the first leg of the challenge, making this segment of the walk more challenging. He also mentioned that the distance was difficult, however, raising money for such worthy causes motivated him to carry on.

Ashok explained his reason for supporting the Hospice:

“As a retired doctor I know what a vital role St David’s Hospice plays in the community, and I hope my fundraising helps continue the fantastic care offered. I like helping charities, this year was particularly special for me because it was my 75th birthday. This was in January, and I was unable to celebrate at the time, so this walk along with other charity challenges is my way of celebrating.”

If you would like to support Ashok’s challenge, please visit the link below: