Enigma Hairdressers located on Llewelyn Avenue Llandudno established in 1999 by owner Joanne Hughes recently celebrated their 22nd Business Anniversary. As a way of celebrating their success, they decided on their anniversary day to have a collection in the salon, donating their entire day’s taking to local palliative care charity St David’s Hospice, totalling to a staggering £848.31!

Enigma owner Joanna Hughes and the staff have been long-time supporters of St David’s and since 2008 have raised an amazing £7,500 towards their local adult Hospice service.

This is not Enigma’s first Anniversary celebration in aid of St David’s Hospice. To celebrate their 20th year of creating beautiful hair, they hosted an evening function in the salon with clients paying for hairdos, in addition to food and drink- this event alone raised over £1300 for the local Hospice.

In addition to Anniversary celebrations, they have also got involved in Hospice competitions such as Find Mostyn the Great Orme Goat, whilst also hosting small in-house Fundraisers over the years. 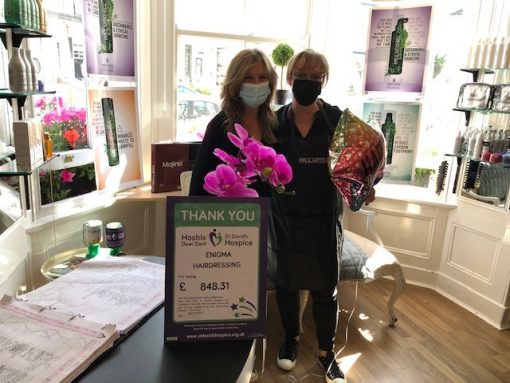 Pictured are Joanna and Ruth from Enigma with their fundraising certificate

Enigma’s team explained their reason behind supporting the charity:

‘’As a team we value the importance of the services that St David’s Hospice provide for our local community, we also recognise that fundraising has been extremely difficult under the current circumstances. We are passionate about fundraising for such a worthy charity as all our team have been touched by the Hospice at some point in our lives, we feel that there was no better way of saying thank you than sharing our 22nd Anniversary celebration with the charity. Fundraising for St David’s Hospice is our way of giving back to the charity for the amazing work they carry out. ‘’

‘’St David’s would like to thank Joanna, her staff and all of Enigma’s customers for their generosity. The money raised will play a vital part in St David’s Hospice continuing to provide end of life care free of charge to the people of Conwy, Gwynedd and Anglesey.’’

If you would like to fundraise for the local palliative care charity, please contact their Fundraising Department on 01492 873674