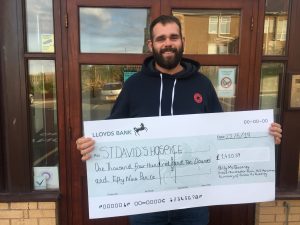 For Billy McQueeney, from Llandudno, St David’s Hospice holds a very special place in his and his family’s heart. Having experienced the Hospice’s specialist care first hand this inspired him to raise funds for the local charity.

Earlier this year, the 26-year-old Electrical Fitter ran the Great Manchester Half Marathon, a 13.1mile route through the city, passing sites such as Man United’s Old Trafford stadium, the famous cobbles of Coronation Street’s new set and the 47-storey skyscraper Beetham Tower.

Billy said: “The Hospice looked after my mum and nan in their time of need before they passed. Not only do they care for the patients but they also make sure they do what they can for the patient’s families, which is a truly kind gesture I’ll never forget.

“I loved participating in the Manchester half marathon. The support from people at home and everyone on the day really pushed me on. All being well next year, I would love to do something again for the Hospice.

“I hope the money raised can make a difference in any way possible to the hospice.

“I would urge anyone contemplating doing a charity run to do it. It fills you with pride doing something for such a brilliant charity.”

“Thank you to Billy for running the Manchester Half Marathon for us. Taking this challenge on and running further than he’s ever run before is something he should be really proud of.

“Billy’s support not just through the Manchester Half, but with other hospice events has been really helpful to us. The money raised will make a massive difference to the patients and their families here at St David’s Hospice.”

You could follow in Billy’s footsteps and run either the Bangor Half (Sunday, October 6th) or Conwy Half (Sunday, November 17th) half marathons for St David’s Hospice.

St David’s Hospice has a limited amount of free places (min. sponsorship required) in the two half marathons. For more information or for a promo code contact James on 01492 873674 or email james.wilde@stdavidshospice.org.uk.