Cancer Chums, founded in 2002 by a group of women who met whilst undergoing treatment at Llandudno Hospital raised £1111.74 for St David’s Hospice, a local adult Hospice.

This money was raised as part of the group’s ‘2020 Three Hospice Appeal’ for St David’s Hospice, Tŷ Gobaith and St Kentigern. Like many other events this year, Cancer Chums Summer Lunch and Christmas Lunch were cancelled as a result of COVID-19 restrictions. 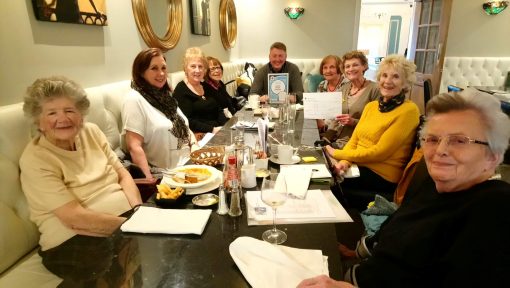 Despite this massive set back, the group pledged to raise over £1,000 for all three charities, successfully meeting their goal, donating over £1,000 to St David’s Hospice alone.

Their fundraising efforts were achieved through the combination of donations from group members, friends and supporters along with sales generated from their 2020 catalogue, in addition to the profits made from the sale of thirty Christmas cakes.

From the groups small beginning in 2002 to a much wider group in 2020, a total of over £30,000 has been raised in aid of local cancer services, hospitals and hospices. Since 2008 over £13,500 has now been raised for St David’s Hospice alone, contributing massively towards the charity’s annual £5 million running cost.

Adrian Owen, St David’s Hospice’s Conwy Community Fundraiser expressed his thanks on behalf of his team;

‘’We would like to give a massive thank you to the ladies at Cancer Chums, this year has been extremely difficult for charities with fundraising events cancelled, however, the support received from the community has been outstanding, enabling our charity to continue providing end-of-life care, free of charge to the people of Conwy, Gwynedd and Anglesey’’