Brothers in law Phil Kendall 40 and Andy Kiddell 52 from Llandudno Junction will be cycling from Land’s End to John o’ Groats over nine days followed by a 105-mile run back to Deganwy, raising much needed funds for local palliative care charity St David’s Hospice. 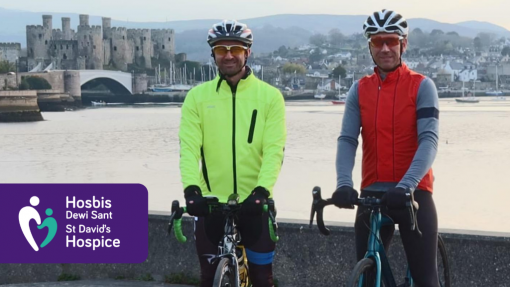 They will start their route on the 31st of July 2021 from Lands’ End and will work their way through Oakhampton, Bath, Ludlow, Haydock, Carlisle, South Queensferry, Tarland, Bonar Bridge then John O’Groats. With the miles totting up to 1009 miles in total. Phil will then travel to where his late Mother Judith was born, Oxley, Wolverhampton and run back to his father’s house in Deganwy completing 105 miles in four days completing the thirteen-day challenge.

Phil and Andy will be cycling between 102 and 130 miles per day and will experience a couple of days of steep ascent climbing up to at 8000ft. This challenge is in memory of Phil’s Mother, Judith Kendall, who sadly passed away recently with pancreatic cancer.

Although Judith was not cared for by St David’s Hospice, Phil emphasised on the importance of supporting the local charity, as his mother had been a keen Hospice lottery player over the years, and his father continues to play the lottery on her behalf as the family believe strongly in the importance of the work the charity does for so many families in their time of need.

Phil shared his thoughts on the challenge:

‘’I am not looking forward to day eight of the challenge, which is the 130-mile 8100ft climb.  However, reaching John O’Groats has to be the highlight and having a toast for Mum will make the climb worth it.’’

‘’I think the running could end up being more of a walk really. I am hoping to run as much as possible, however it depends on how my legs are. I hope to run as it would take so much longer to walk.’’

Phil works as a New Car Sales Manager, at Rybrook Land Rover Conwy, with the company backing their challenge:

“Richard who is a friend/work colleague, will be driving one of Rybrook Land Rover’s new Defenders. He will follow us along the route with food, drink etc. One of my customers has leant me his Defender 130 campervan to sleep in which is amazing.’’

“Andy and I thought if we do such a crazy and gruelling challenge it would encourage people to get behind us and donate to two great causes in memory of mum.”

To date, the pair have raised a staggering £ £4,661 for St David’s Hospice, shared equally with the Marie Cure end of life care charity.

If you’d like to support the challenge, please visit their just giving page:

‘’We would like to wish a massive good luck to Phil and Andy ahead of their thirteen day challenge in aid of St David’s Hospice. We are extremely grateful for their support, and feel very lucky that generous donations from their amazing efforts will benefit end of life care services provided by our Hospice to the people of Conwy, Gwynedd and Anglesey’’

PHOTO CAPTIONS –  Phil and Andy get on their bike!