Comedian Tudur Owen and a group of twenty local Hospice heroes showed their support for St David’s Hospice walking for over 10 hours as part of the Anglesey Coastal Trek. 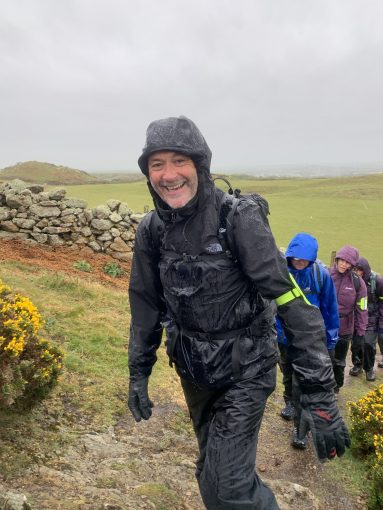 The event was initially planned for April 5th 2020 to coincide with the opening of the new Hospice satellite unit at Ysbyty Penrhos Stanley, Holyhead took place twelve months later on the 8th May.  Originally a one-day walking event, it has now been rearranged for three separate days across 2021 ensuring government restrictions of a maximum 30 participants are followed. 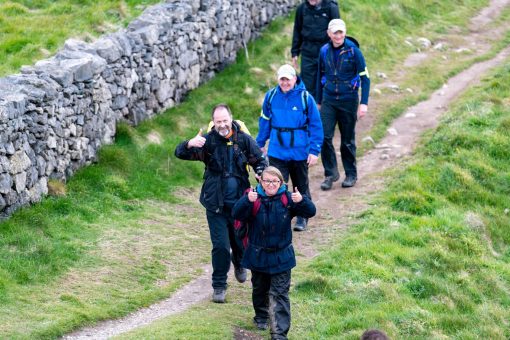 (Thumbs up from Alix Hughes and James Daly)

Led by Anelu Aim Higher, it followed a physically demanding twenty-mile route on the coastal path from Cemaes Bay to Moelfre. The group were in good spirits, although the same couldn’t be said about the weather.

Area Fundraiser for Gwynedd and Anglesey, Keri McKie who accompanied the walkers said:

“Despite arriving early at Cemaes on a very wet and windy Saturday morning, the group were keen to get going and enjoy the day. The first section of the walk to Bull Bay proved to be very challenging, with the persistent rain not helping matters.

“However, not long after this section we saw a break in the weather which continued to improve for the remainder of the walk. Although a challenging route, we were rewarded with outstanding views of the coastline.

“The effort put in by the whole group was fantastic and there were many emotions on reaching the finish line, especially seeing family members waiting to cheer them in. Their sense of achievement makes it all worthwhile. It was a fantastic day which I was proud to be a part of.

“I would like to thank patron Tudur for braving the conditions and walking the 20 miles with us, his presence was certainly welcomed by all. Also thank you to Stephen Jones, Anelu Aim Higher for once again leading a safe and successful walk.”

St David’s Hospice is a local charity providing end-of-life care free of charge to the adults of North West Wales. Annually, it costs over £5 million to run St David’s Hospice of which over 90% of the funds come from people taking part in events such as the Anglesey Coastal Challenge, buying in our shops and giving donations. 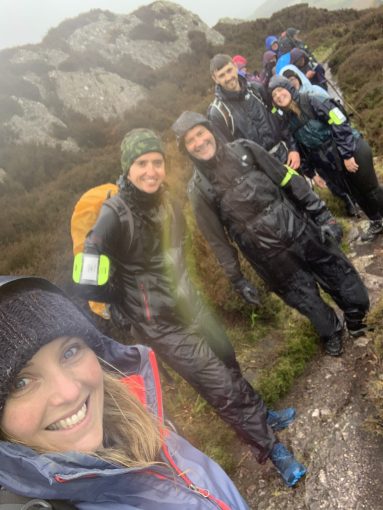 Christine Evans walked in memory of her father. She said:

“Dad passed away at the Hospice in December 2017 and although he was only there a day, the care dad received before passing and even us as a family after was so amazing and it’s just our way of saying thank you and giving back to the Hospice”.

Hospice Patron, Tudur Owen praised all those who took part:

“It was an outstanding effort by all in support of the new St David’s Hospice in Holyhead. Cemaes to Moelfre is the most demanding section of the Anglesey coastal path, and especially so in torrential rain and wind.  All who took on this challenge can be especially proud of their achievement. It was certainly a day to remember!” 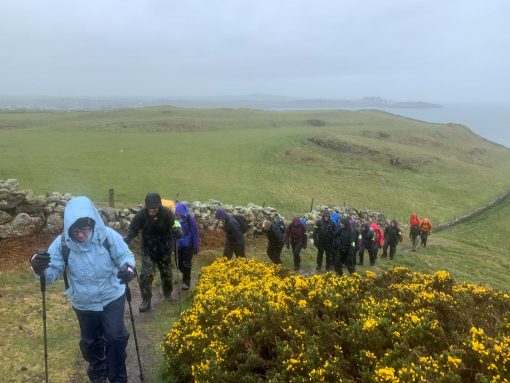 The next two group walks will be on June 26th and September 25th and there are limited places available. To find out more please contact Keri McKie keri.mckie@stdavidshospice.org.uk  01248 858 825.