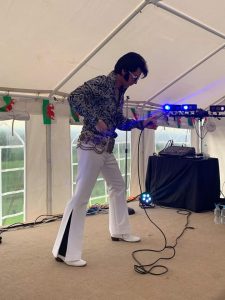 Friends and family of a local village rallied together and raise £1970 for hospice care and cancer charities.

John Hughes, owner of the Tan y Bryn Caravan and Lodge Park, Bryn Pydew held a charity event at the park to raise funds in memory of his wife, Ann Hughes.

Entertainment on the night was headlined by ‘Elvis’ Mr Tommy Holland with food prepared by local chef Bryn Powell. Also as part of the event, a new bench was unveiled in Ann’s memory now located in the new lodge park area.

“I am so appreciative of all the caravan owners, friends, neighbours and residents of Bryn Pydew that helped make the event a success. We already have plans afoot to hold a similar event next summer.”

“I would like to thank John and the family for their generosity in hosting this fantastic event in Bryn Pydew and for all the caravan and lodge owners, friends and local residents for supporting the night.