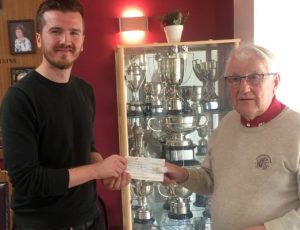 Senior members of the Rhos-on-Sea Golf Club teed off in aid of St David’s Hospice raising much needed funds for the local cause.

The club held a nine-hole charity competition on 7th August to raise funds for their local adult hospice in memory of Marjorie Yeadon. Organised by Eric Yeadon, Majorie’s husband, this is the fourth year the competition has taken place as part of the Open Week. Over the years, this event has raised more than £1000, with year’s event raising £380.

The winners of the competition received gift vouchers for 1st, 2nd and 3rd prize which were kindly donated by club members.

In 2010, Marjorie was diagnosed with bladder cancer and was in the care of St David’s Hospice for eight weeks. After her passing, Eric decided this would be his way of saying thank you and giving back to the Hospice. He also organises a ‘Birthday Bash’ golf competition in November (around his birthday) which is also for the Hospice.

“St David’s Hospice is an absolutely magnificent place. It is really hard to put into words how great it is. It is a centre of excellence. My wife was cared for with dignity. I hope the funds and awareness raised helps St David’s Hospice in any way it can. Thank you to all the Rhos-on-Sea golf club members who took part and to also donated towards the prizes.”

“Thank you to Eric and Rhos-on-Sea Golf Club for their consistent support. It’s thanks to people and groups like them raising funds and awareness for us that we’re celebrating 20 years of care this year.

“This donation will go towards the care given to patients and their families here at St David’s Hospice.”