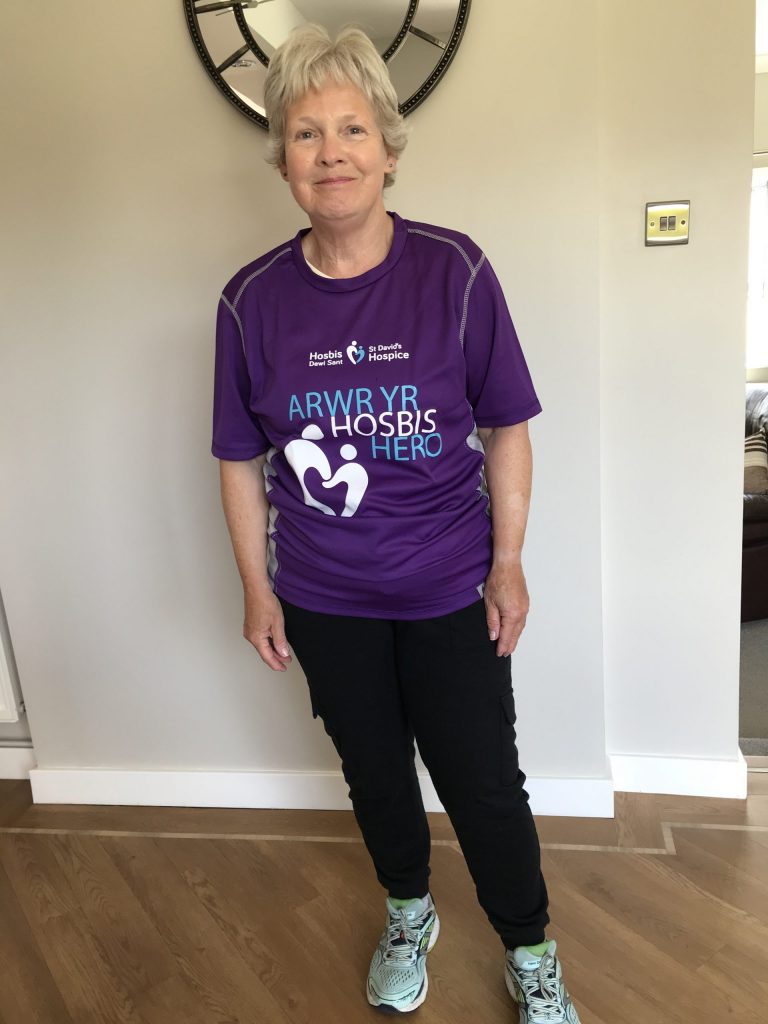 Throughout the Lockdown, St David’s Hospice has continued to be there for their Day Therapy patients despite the centre having to temporarily close due to the pandemic.

One patient who has been grateful for the support is Janet Jones, from Llandudno. Janet was diagnosed with cancer twelve months ago. Having gone through surgery and chemotherapy, which finished before Christmas sadly the cancer has returned.

The St David’s Hospice Outreach Team have been in touch with Janet once a week, and are just a phone call away if advice is needed.

A supporter of the charity for many years, Janet was a Hospice Staff nurse for three years seeing the care first hand, after which she volunteered at the Llandudno Charity Shop and also in the Hospice’s Cafe Dewi. Over the years she has also taken part in various fundraising events.

To show her thanks to the charity, Janet has pledged to do a 66 mile sponsored walk over a month, averaging 2-3 miles a day.

Janet said: “I have cancer, which started twelve months ago and have had surgery and chemotherapy finishing before Christmas. Unfortunately, the cancer has come back and there’s no further treatment.

“Day Therapy have supported me during this time. Every week during lockdown they have phoned giving their support and advice.

“St David’s Hospice is very dear to me as family members have passed away there.

“Before this, I have been very fit doing a 10k every day or more and ran the London Marathon for St David’s Hospice in 2007. I decided to walk 66miles, as I turned 66 in May. I had planned to do something for my 65th birthday but wasn’t well enough.

“So far I have done 45 miles, although I haven’t been able to walk since the 8th  as the illness is kicking in more now. Unfortunately, I haven’t had a good week. I’ve not too far to go and going to try and do a bit every day.

“The Hospice needs financial support to carry on with their brilliant work, more than ever considering the current situation.

“Knowing I can phone the Outreach Team at any time means a lot when someone isn’t well.”

St David’s Hospice is a grassroots charity built on the generosity of the communities it serves. Each year the Hospice needs to raise over £4 million to keep its doors open to be able to look after people living with life-limiting illnesses in North West Wales. Last month the charity announced that due to Covid-19, they will face a total financial loss of over £1 million, even after the government’s help.

So far Janet has raised over £300 for the hospice, anyone wishing to sponsor her should go to https://www.justgiving.com/fundraising/janet-jones66