On Sunday 3rd October, Ste Bozier an avid runner and Hospice supporter, will be travelling to the Capital to take part in one of the world’s greatest marathons. Running a distance of 26.2miles, he will soak up the atmosphere as he passes the most famous landmarks in the city – including Buckingham Palace, The Cutty Sark, Tower Bridge and Canary Wharf. 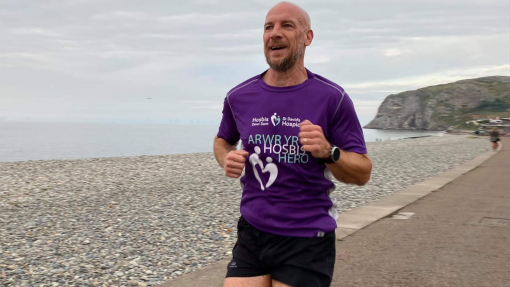 Familiar with distance running, Ste has completed marathons previously, including the Snowdon Eryri Road Marathon, plus a 53km ultra marathon (six laps of the Great Orme) earlier this year to raise money for the fisherman who were lost at sea on the Nicola Faith.

Ste, 43 spoke about this running challenge and why he has chosen to support his local hospice:

“I’m starting to feel confident about the upcoming London Marathon as my training is finally going well after a few months of injury, so if everything falls into place it will be a great day!

“I’m hoping to raise as much money as possible for St David’s Hospice. I know a few people who have needed the care they provide, and I know it has been a great help to them and their family at a much-needed time.”

“We’re so grateful to Ste for choosing to run the London Marathon to support our hospice and we’d all like to wish him the very best for the race day. Through the pandemic, our Clinical team have always been there for patients and families at the most difficult time of their lives. With the help from our generous supporters who fundraise for us, our teams can continue to go above and beyond”

Ste is hoping to raise at least £300. You can donate to his London Marathon fundraising page here: https://uk.virginmoneygiving.com/StephenBozier