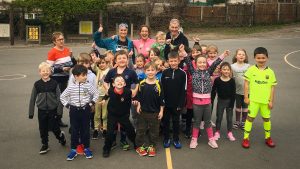 The fundraising day was in support of Nia Rowlands who is running the London Marathon for the local charity at the end of the month.

Nia, whose two daughters attend the school, is taking part in her first ever marathon in memory of her husband. Simon sadly passed away at St David’s Hospice after losing a long battle with a brain tumour in 2014.

“Ysgol Deganwy’s ‘Cyngor Ysgol’ decided to collectively run a marathon to raise funds. St David’s Hospice is such a deserving cause, we have raised money in the past and it is always gratefully received.

“Our marathon was based on 17 laps of the netball court being one mile, therefore as a school, we needed to run 442 laps. The whole school participated in the event from nursery up to Year 6 and it was lovely to see the support the children have been giving to each other.

“A big thank you to all the children and their parents for their fantastic support during this event. The ‘Deganwy Marathon’ was a success! “

The children received a sticker as a token of their participation and the total amount raised is £315 towards Nia’s London Marathon sponsorship.

To support Nia and make a donation go to https://uk.virginmoneygiving.com/NiaRowlands