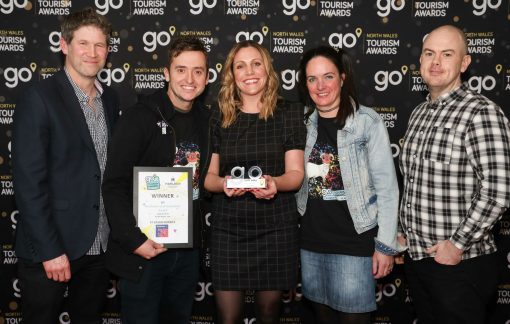 Local palliative care charity were announced as the proud winners of the Go North Wales Tourism award for resilience and innovation at a recent presentation ceremony.

In April 2020, following the global coverage of the Great Orme goats taking over the deserted streets of Llandudno in Lockdown, the St David’s Hospice Income Generation Team created a bespoke t-shirt design featuring the Great Orme Goats. Due to Covid19, the Hospice fundraising events were cancelled and retail shops closed. Sold on the Hospice’s website, the t-shirts were a bid to help replace significant funds that were lost.

Twenty months later, selling over 9,000 t-shirts worldwide, the goat themed merchandise has raised over £300,000 and continues to raise funds for the Hospice in these difficult and challenging times.

The Hospice Team behind the design attended the award ceremony at Venue Cymru on the 25th November. To celebrate 30 years of North Wales Tourism, the evening had a 1990’s theme with some attendees choosing to dress in fancy dress. It was hosted by journalist Sian Lloyd and the Go Resilience and Innovation Award was sponsored by North Wales Live.

“Thank you to everyone who has supported St David’s Hospice and purchased the T-shirts!

“Winning this award really means a lot to us. It was a huge team effort, with staff and volunteers working hard behind the scenes packaging and sending out the items. The determination of the Hospice team is outstanding, throughout the pandemic it has been a fight for survival and we definitely fought!

“We would also like to thank North Wales Tourism who nominated St David’s Hospice as their chosen charity for the evening and raised over £2000 through a raffle on the night.”

The charity continues to sell the Great Orme Goat merchandise online and in its Hospice shops. It has expanded its range to Christmas jumpers, soft toys and gifts. All the proceeds go directly to St David’s Hospice who provide support and local end of life care, free of charge to adult patients and their families across North West Wales.