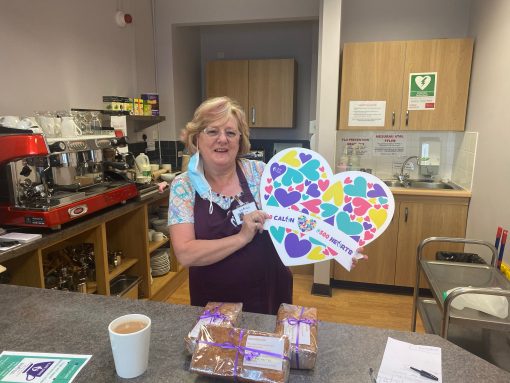 (Lilian Hughes at Café Dewi Llandudno with her homemade cakes)

St David’s Hospice’s #500Hearts campaign runs for the whole of 2021 inviting individuals, families, groups, and businesses to sign up and raise a minimum of £100 for the local Hospice. In return, supporters will receive an exclusive 500 Hearts Great Orme Goat Toy as a thank you!

In a bid to raise a minimum of £100 for the Hospice, Lilian launched her homemade cake baking fundraiser, selling her cakes to family, friends, and staff at St David’s Hospice. Her most popular cakes are coffee and walnut, lemon drizzle, chocolate, and her delicious homemade Bara Brith, which proves very popular with the staff at the Hospice. 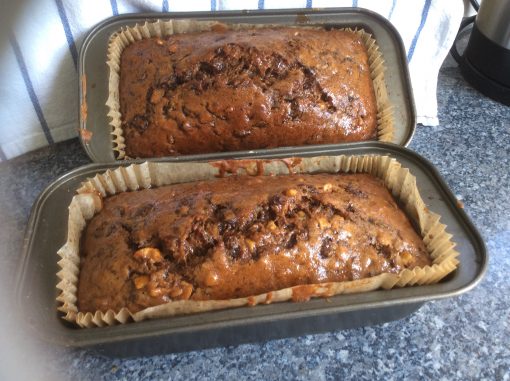 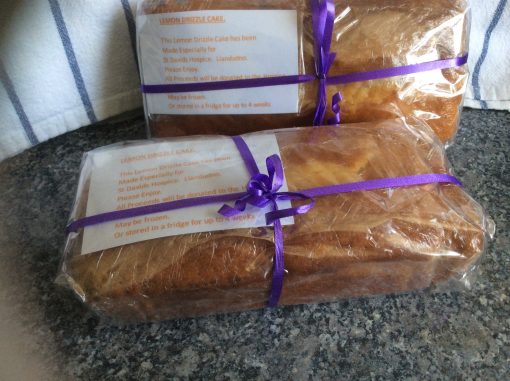 Lilian, who is originally from Liverpool, moved to Llandudno over fifty years ago. Her late husband Meirion Hughes sadly passed away at the Hospice just short of eight years ago, with Lilian praising the outstanding care her husband and herself received by St David’s Hospice.

‘’This is pay back time. The care Meirion received during the short period he spent at St David’s Hospice was truly amazing. Not only did the staff care for Meirion, Hospice services were extended to me. St David’s bereavement counsellor suggested I should start volunteering at the Hospice. Six years and counting, here I am volunteering weekly at Café Dewi located on Abbey Rd’’.

Officially pre-pandemic, Lilian worked one shift every two weeks, however since the takeaway service started at Café Dewi last June she has been doing three shifts a week. She’s helping the Hospice cover the shifts left vacant by volunteers who aren’t quite ready to return.

According to Lilian, her ‘’cakes have no calories’’. No wonder they are so popular!

To date, since the launch of her fundraiser in June 2021, she has raised over £120. With Lilian kindly donating all profits to the Hospice, including the cost of the ingredients at her own expense.

Volunteer Co-ordinator Lou Barber expressed her thanks to Lilian:

‘’Lilian is a valued member of the St David’s Hospice volunteering community. She is very hands on at events and is very keen to help the Hospice in whatever way possible. We are extremely thankful for her support, with her time and passion for Hospice proving invaluable’’.

Lilian estimates that she has raised up to £5,000 for the Hospice over the last eight years. This total includes her weekly Hospice Lottery entry, funds raised at Meirion’s funeral, the sale of her knitted quilts and advent calendars in addition to her current fundraiser, with her total increasing by the day.