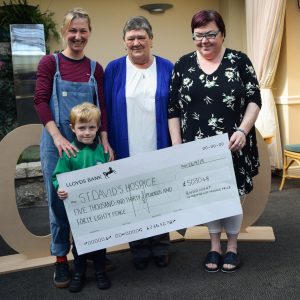 Inspired by care at St David’s Hospice, a Llanberis family showed their support and organised a charity bingo night.

Maggie Price passed away at St David’s in June 2019. The specialist care and support offered to Maggie and her family inspired her daughters Claudette and Tracy, together with Maggie’s sister Ann to raise as much money as possible for the local charity.

“Anyone who we came across at the Hospice was caring, thoughtful and sensitive. Everyone from cleaners, volunteers to nurses and doctors – all amazing people. To be able to work or volunteer your time within the Hospice, I believe you’re a special kind of person. Truly amazing!

“I will never forget walking in to see a nurse sitting, comforting and holding my mother’s hand until we arrived. It meant so much to know that she had not been alone during her most vulnerable time.

“My mother was a big fan of bingo and had always been a keen fundraiser. A charity bingo evening with plenty of raffles seemed an obvious choice. It was a great success, everybody came out to support.

“Local businesses have been unbelievably generous in donating fantastic prizes and without them, the night wouldn’t have been such a blast!”

The charity evening was held at the Dolbadarn Hotel in Llanberis on the 13th September with over 170 people of all ages from the local community attending. Through the bingo, raffles and auction the event raised £5030.48 for St David’s Hospice.