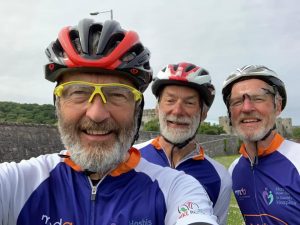 Three friends took to their saddles and cycled from Asia to Anglesey on the Iron Curtain Cycle Trail raising thousands for charity.

Now in retirement, Dr Steve MacVicar, a former Beaumaris GP, Dr Andy Fowell, a former consultant in palliative medicine, and Roger Thomas, a former CEO of the Countryside Council for Wales, took on and completed their biggest cycling challenge yet.

The mammoth fundraising adventure started on 28th March in Istanbul, Turkey crossing 16 countries and finishing in Holyhead, Anglesey on the 23rd May.

Through sponsorship and donations, they raised £20,262.50 which was split equally between the new St David’s Anglesey Hospice which is being developed at Penrhos Stanley and the Motor Neurone Disease Association.

The phenomenal achievement saw the trio cycle for 53 days, covering 4,923 kilometres (3060miles) and climb four mountain ranges. They encountered a variety of challenges throughout the trip including; mud tracks, paths with very steep rises and plunging descents, six punctures, and navigating through the fog, snow and persistent rain.

On their Facebook page @AsiaToAnglesey, which enabled supporters to read daily updates of their journey, the team wrote:

“Thank you to everyone for all your support over the past few months and the warm welcome we have had since arriving back home… Everyone’s generosity has been inspirational and definitely played a big part in keeping the wheels turning. Thanks to FAUN Trackway ltd, Williams Denton Cyf. and Andrew J Spillane Wealth Management Ltd as the named major sponsors.”

Anglesey’s Albert Owen MP had followed the journey and met them at their final destination at Ysbyty Penrhos Stanley. Praising the three for their efforts he said:

“It was a delight to welcome back the local cyclists who had completed the Asia to Anglesey charity ride. This is a fantastic achievement cycling across 14 countries and raising money for two excellent charities Motor Neurone Association and St David’s Hospice.

Since being back in Anglesey the cyclist have been educating local schools and giving illustrated talks to local groups about their trip and the countries they travelled.

For further information about their trip and to read their blog go to www.facebook.com/AsiaToAnglesey