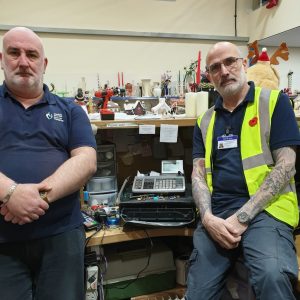 Staff and volunteers at St David’s Hospice have been left shocked and upset after thieves targeted the charity.

Properties in Mochdre, that helps raise money for end-of-life care in North West Wales, were a victim to costly damage during two overnight break-ins the space of three days.

The charity’s Donation Centre on Quinton Hazel Enterprise Park was first targeted overnight on 7th November followed by the Reuse Shop at The Household Recycling Centre in Mochdre on the evening of Sunday 10th.

Staff at the Donation Centre, which acts as the main drop-off point for the St David’s Hospice shops, discovered an attempted break-in on Friday morning which was unsuccessful but caused damage to doors and windows. However, the second break-in at the Reuse Shop they were successfully gained entrance.

“We’re shocked and disappointed that thieves would target us and attempt to take money and stock that should have gone to the charity.

“Members of our retail team discovered the break-ins when they went to open up the following day.

“At the Reuse Shop the opportunist broke the window at the front of the building, damage display cabinets, rifled through drawers, broke the cash register and stole the £50 float. They then tried to take a bike which they got stuck on the fencing.

The police are now involved and we have had to close the Reuse Shop to allow for an investigation to take place meaning we lose a day’s business.

“It has obviously had an impact on our team, who are all very dedicated to supporting the Hospice.”

Proceeds from the sale of stock provides vital funds that enable St David’s Hospice to deliver hospice care to adult patients living with advanced illnesses in Conwy, Gwynedd and Anglesey. Each year the Hospice needs to raise £4 million to continue with care and services.